The convention center was packed with $1,000 tables, the dress casual, as all Alaskan events seem to be, and the mushers mingled in the crowds. My favorite part of the night? The clear fact that the mushers would rather be on the trails than mingling, the times their faces really grew animated was when talking about their dogs.

I am here in Anchorage this week by happenstance, others because being a part of the Iditarod is on their bucket list. The Musher’s banquet was filled with the founders, memories of them, and racing legends. The Iditarod has groupies like you would expect at a rock concert. People lined up to have their favorite mushers sign their shirts and take pictures (see picture below of an acquaintance pictured with two identical twin mushers). I saw a book of trading cards even. As with every sport, there is a culture, and the Iditarod is no different.

Sled dogs used to be the major mode of transportation here in Alaska. It was the 1925 serum run to Nome, also known as the Great Race of Mercy, a transport of diphtheria antitoxin serum by dog sled relay across the U.S. territory of Alaska by 20 mushers and about 150 sled dogs 674 miles (1,085 km) in five and a half days that put dog mushing back on the world’s stage briefly before airplanes changed the face of travel completely. The Serum Run saved the small town of Nome and the surrounding communities from an incipient epidemic and the lead dog, Balto, became a legend. By the 1950’s and early 60’s families weren’t passing down methods of dog mushing to the younger generation and it was beginning to die out. The Iditarod Trail race has become the iconic symbol of this state and frontier life. It accomplished both Dorothy and Joe’s goals, to bring life to the Iditarod trail and renewed interest in dogsledding. 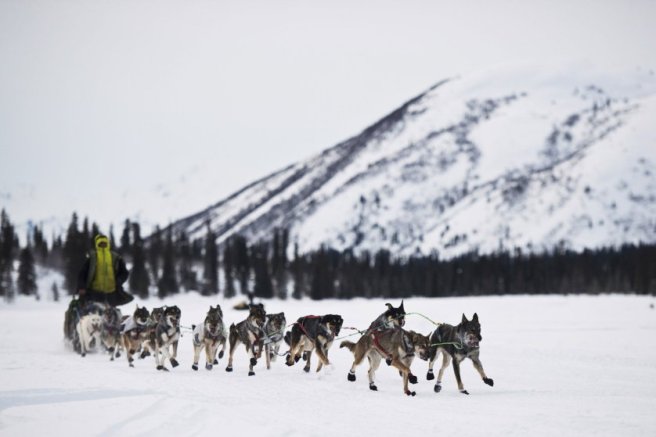 It isn’t called the “The Last Great Race” for nothing. In a world where constant communication is normalized, mechanization is prized, and comfort is sought above all, the Iditarod Sled Dog Race is a uniquely special event. The mushers have to train their dogs all year, yet elements of the race can’t be controlled now, just as they couldn’t in 1925, racing to Nome. Weather can be harsh, dogs can struggle, yet the mushers continue on.

For me, I started the week not caring a fig newton about this race, and now I’m fangirling. Susan Butcher, the late female racing legend of the Iditarod, named her firstborn after her lead dog, Teckla, that made the first dog-sled ascent of Denali. The Iditarod has strong women, strong men, all heart, and a crazy love of nature and animals. We could use more of this in the world. Iditarod, welcome to your newest fan.